Angiomyolipoma – a benign tumor in the kidneys

Angiomyolipoma – a neoplasm of benign nature, which consists of fat and muscle tissue, as altered vascular and epithelial cells. Most often, the disease affects the kidneys, but in practice, such a tumor is sometimes found in the adrenal glands, pancreas, and skin. This tumor can be localized in the cortical layer of the brain or body, in which case the capsule separates from the surrounding healthy tissue.

In most cases, this pathology is detected in only one kidney (unilateral angiomyolipoma). Typically, the tumor is small, but in particularly severe cases, its diameter can reach 20 cm. With a small amount of angiomyolipoma, the kidney may be asymptomatic or with minimal clinical signs. According to the statistics of patients, the disease is much more common, which may be due to the influence of female sex hormones on the development of the pathological process.

Types of angiomyolipoma’s and causes

Considering the genetic predisposition, two forms of the disease are distinguished:

Important: Hereditary angiomyolipoma is characterized by the presence of several small tumors in both kidneys at the same time.

Depending on the type of tissue that forms the angiomyolipoma tumor, there may be:

In renal angiomyolipoma, the absence of treatment can lead to the development of serious complications. Which includes:

Symptoms of the disease that indicate angiomyolipoma of the kidney

The degree of symptoms of renal angiomyolipoma depends on its size. If the size of the lesion does not exceed 4 cm, then in most patients there are no characteristic signs that indicate the presence of pathology. This is due to the fact that in the early stages of angiomyolipoma development, there is no significant pressure on the surrounding tissues. In many cases, the tumor is accidentally detected by ultrasound examination of the kidneys.

With a tumor size greater than 5 cm in one person, the following symptoms may be observed:

Important: the appearance of severe pain in the angiomyolipoma of the kidney may indicate a rupture of blood vessels, which requires urgent medical attention and medical care.

In addition to being diagnosed with angiomyolipoma of the kidney, many patients are concerned about the question of whether it is life-threatening. As a rule, with timely diagnosis, control and treatment, the disease has a good prognosis and does not pose a threat to human life.

A set of methods is used to confirm the diagnosis of renal angiomyolipoma. First, it is necessary to consult a nephrologist, which will result in conducting a survey and examination of patients, and the necessary studies will be assigned.

To assess kidney function and the safety of their functions, use laboratory diagnostics, which includes:

In the early stages of the disease, angiomyolipoma’s are very small and their presence does not affect the overall health and health of the patient. However, during this period, it is important to identify the pathology and start treatment in order to reduce the risk of possible consequences. For the diagnosis of a neoplasm, the assessment of its size, structure, nature and localization is applied to the following methods:

Rapid tumor growth is usually seen only in the case of an inherited form of the disease. For tumor sizes larger than 5 cm, surgery is performed. Also, surgical treatment is indicated if the patient is observed:

Important: With renal angiomyolipoma, treatment with folk remedies is ineffective. In addition, in some cases, if there is active tumor growth, it can cause complications caused by loss of time for timely appropriate treatment.

This type of treatment is used in such situations:

The following methods are used in surgery:

Embolization. With this intervention, drugs are injected into the blood vessels that feed the tumor. They create a “cork” effect. The intervention is performed under X-ray control. Thanks to this operation, it is much easier.

By enucleation. In this operation, only the tumor is removed, it does not affect the renal parenchyma. This is the latest way to remove tumors from the kidneys that reduce blood loss. It is used only for benign education.

Kidney separation. The tumor is removed along with part of the kidney. There are two types. Classic – a small incision in the back to access the kidney. Laparoscopic – several smaller incisions.

Cryoablation. This is a method of removing tumors with fever. It is used to remove small formations. The advantage of this method is that minimal surgical intervention is applied, operable ones return quickly, and if necessary, it is possible to repeat the procedure.

Nephrectomy. It is the complete removal of the diseased kidney. It is used with a strong increase in angiomyolipoma, more than seven centimetres. This method of treatment is used in extreme cases, if there is no possibility of saving the kidneys due to the danger of serious consequences. At the same time, it is obligatory for the other kidney to function without failure. Surgical interventions are performed under general anesthesia, classical or laparoscopic. 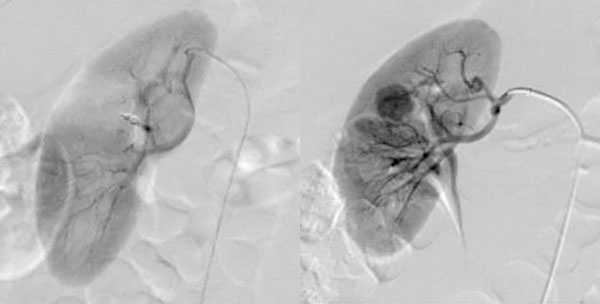 Embolization is a minimally invasive treatment, which is usually used to treat benign (non-cancerous) masses in the kidney. To embolize means to block an artery or vein. During an embolization procedure, small particles are injected through a catheter into a mass. These particles block blood flow to the mass, taking away its supply of oxygen and nutrients.  This causes the mass to die and shrink.

Vascular surgery and interventional radiology physicians, and a team of imaging physicians, highly trained technicians, and nurses perform this procedure in a hospital setting. Using X-ray guidance, a specially trained interventional radiologist inserts a thin tube, called a catheter, into the artery in the groin. When the catheter is placed in the branches of the arteries that feed the mass, the embolization particles are injected, especially targeting the mass. Additional X-rays will be taken to confirm that the mass has been treated. At the end of the procedure, the catheter will be removed, and a small hole in the skin will then be covered with a bandage. No stitches required.

After your embolization procedure