What is a pacemaker

Pacemaker – is a small device that is placed under the skin in the chest to help control and regulate the heartbeat. It is used to help your heart beat more often if you have an irregular heartbeat (arrhythmia), particularly a slow one. The main role of the pacemaker is to maintain normal heart work and, if necessary, to activate the heart muscle with electric impulses or to stop arrhythmias.

They can be temporarily implanted to treat slow heart rate after a heart attack, surgery or drug overdose. They can also be permanently implanted to correct slow or irregular heartbeat or, in some people, to help treat heart failure.

The pacemaker consists of a housing with a battery and several electrodes that are placed through the veins inside the heart. The installation of a pacemaker in the chest implies surgical intervention.

Depending on your condition, you might have one of the following types of pacemakers:

Single chamber pacemaker. This type usually carries electrical impulses to the right ventricle of your heart.

Dual chamber pacemaker. This type carries electrical impulses to the right ventricle and the right atrium of your heart to help control the timing of contractions between the two chambers.

Biventricular pacemaker. Biventricular pacing, also called cardiac resynchronization therapy, is for people with heart failure with abnormal electrical systems. This type of pacemaker stimulates the lower chambers of the heart (the right and left ventricles) to make the heart beat more efficiently. 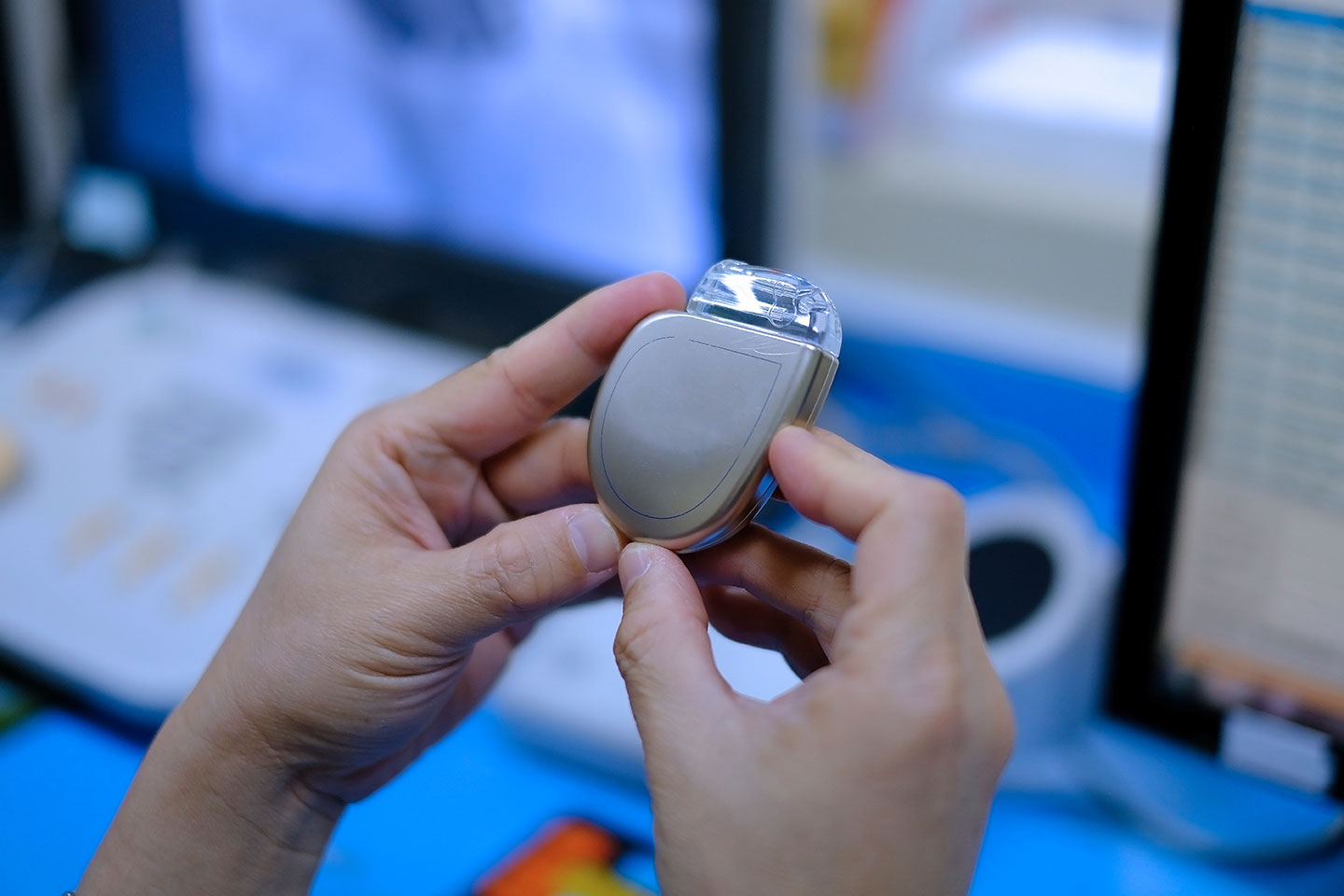 How the heart beats

The electrical system of your heart controls your heartbeat, starting in a group of cells at the top of the heart (sinus node) and spreading to the bottom, causing it to constrict and pump blood. Aging, heart muscle damage from a heart attack, some medications and certain genetic defects can cause an abnormal heart rhythm.

What a pacemaker does

Pacemakers work only when needed. If your heartbeat is too slow (bradycardia), the pacemaker sends electrical signals to your heart to correct the beat. Also, newer pacemakers have sensors that detect body motion or breathing rate, which signal the pacemakers to increase heart rate during exercise, as needed.

Complications from surgery to implant your pacemaker are uncommon, but could include:

Before your doctor decides if you need a pacemaker, you’ll have several tests done to find the cause of your irregular heartbeat. These could include: 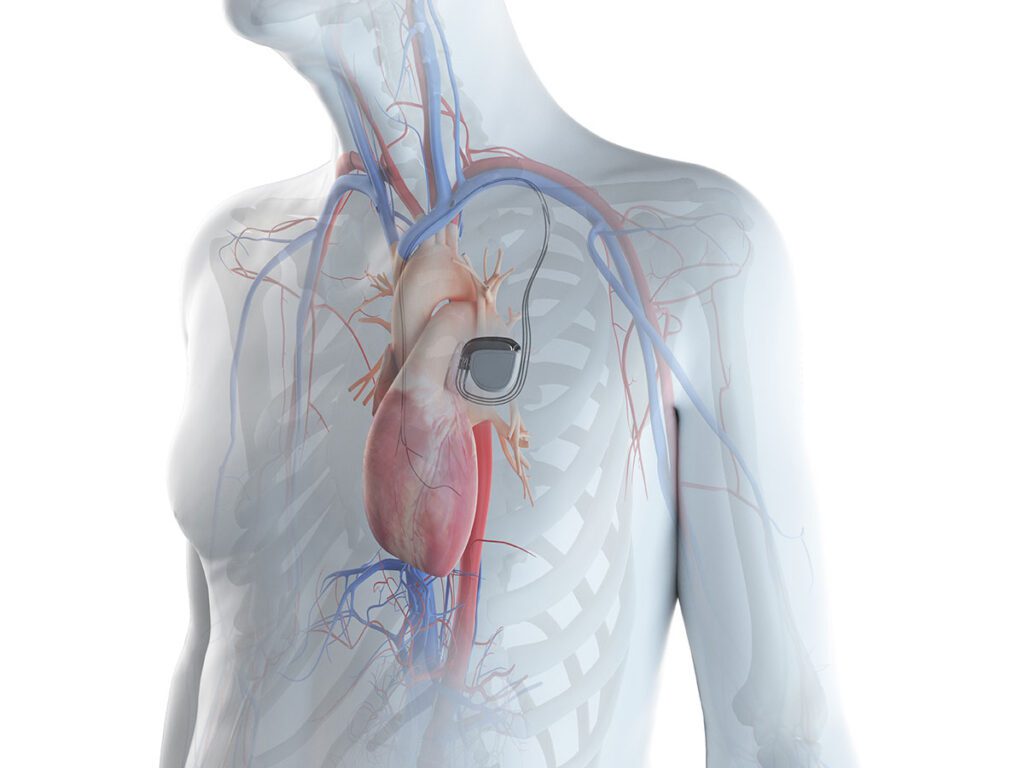 What can you expect – the installation of a pacemaker

You’ll likely be awake during the surgery to implant the pacemaker, which typically takes a few hours. You’ll have an intravenous line placed, through which you might receive medication to help you relax.

Most pacemaker implantations are done using local anesthesia to numb the area of incisions. Your chest is cleaned with special soap.

In the specially equipped Cath-lab of the Pulse Cardiology Center, cardiology specialists – interventional cardiologists, perform the installation of a pacemaker. One or more flexible, insulated wires are inserted into a major vein under or near your collarbone and guided to your heart using X-ray images. One end of each wire is secured to the appropriate position in your heart, while the other end is attached to the pulse generator, which is usually implanted under the skin beneath your collarbone.

You’ll likely stay in the hospital for a day after having a pacemaker implanted. Your pacemaker will be programmed to fit your pacing needs. Arrange to have someone drive you home when you’re discharged.

Most pacemakers can be checked remotely. Your pacemaker transmits to and receives information from your doctor’s office, including your heart rate and rhythm, how your pacemaker is functioning, and its remaining battery life.

Your doctor might recommend that you avoid vigorous exercise or heavy lifting for about a month. Avoid putting pressure on the area where the pacemaker was implanted. If you have pain in that area, ask your doctor about taking painkillers.

It’s unlikely that your pacemaker would stop working properly because of electrical interference. Still, you’ll need to take a few precautions:

Cellphones. It’s safe to talk on a cellphone, but keep your cellphone at least 15 centimeters away from your pacemaker. Don’t keep your phone in a shirt pocket. When talking on your phone, hold it to the ear opposite the side where your pacemaker was implanted.

Security systems. Passing through an airport metal detector won’t interfere with your pacemaker, although the metal in it could sound the alarm. But avoid lingering near or leaning against a metal-detection system. To avoid potential problems, carry an ID card stating that you have a pacemaker.

Medical equipment. Make sure all your doctors and dentists know you have a pacemaker. Certain medical procedures, such as magnetic resonance imaging, CT scans, cancer radiation treatment, electrocautery to control bleeding during surgery, and shock wave lithotripsy to break up large kidney stones or gallstones could interfere with your pacemaker.

Power-generating equipment. Stand at least 60 centimeters from welding equipment, high-voltage transformers or motor-generator systems. If you work around such equipment, ask your doctor about arranging a test in your workplace to determine whether the equipment affects your pacemaker.

Devices that are unlikely to interfere with your pacemaker include microwave ovens, televisions and remote controls, radios, toasters, electric blankets, electric shavers, and electric drills.

Having a pacemaker should improve symptoms caused by slow heartbeat, such as fatigue, lightheadedness and fainting.

Your doctor should check your pacemaker every three to six months. Tell your doctor if you gain weight, if your legs or ankles get puffy, or if you faint or get dizzy.

Because most of today’s pacemakers automatically adjust your heart rate to match your level of physical activity, they can allow you to resume a more active lifestyle.

Pacemaker insertion is performed in a specially equipped Cath-lab by experts in interventional cardiology and radiology. Take a look at our team and schedule an appointment. Our call center is available every day until 8 pm on 0117555000 if you have additional questions. You can also contact us via email: info@pulskardioloskicentar.rs