Neurolytic blockade of the obturator nerve in treatment of obturatory neuralgia

Idiopathic obturator neuralgia is a rare clinical phenomenon characterized by pain in the inguinal region and inner thigh.

Symptomatic obturator nerve neuralgia most often occurs as a consequence of an obturator hernia, when neuralgic pain in the upper leg is the leading symptom in more than 85% of cases.

Obturator nerve block is used to treat hip joint pain and is also used in the relief of adductor muscle spasm associated with hemiplegia or paraplegia. Muscle spasticity is a relatively common problem among patients suffering from central neurologic problems, such as cerebrovascular pathology, medullar injuries, multiple sclerosis, and cerebral palsy.

Spasticity of the adductor muscle induced via the obturator nerve plays a major role in associated pain problems and makes patient hygiene and mobilization very difficult. Tenotomies, cryotherapy, botulinum toxin infiltration, surgical neurolysis, and muscle interpositions have been suggested to remedy this problem. Common clinical practice is to combine a sciatic nerve block with the femoral nerve block for surgical procedures distal to the proximal third of the thigh. When deemed necessary, addition of a selective obturator nerve block may reduce intraoperative discomfort, improve tourniquet tolerance, and improve the quality of postoperative analgesia in these cases.

Obturator nerve block is also occasionally used in urologic surgery to suppress the obturator reflex during transurethral resection of the lateral bladder wall. Direct stimulation of the obturator nerve by the resector as it passes in close proximity to the bladder wall results in a sudden, violent adductor muscle spasm. This is not only distracting to the surgeon but may increase the risk of complications such as bladder wall perforation, vessel laceration, incomplete tumor resection, and obturator hematomas. Prevention strategies include muscle relaxation, reduction in the intensity of the resector, the use of laser resectors, shifting to saline irrigation, periprostate infiltrations, and/or endoscopic transparietal blocks. A selective obturator nerve block remains an effective remedy to this problem.

Neurolytic blocks with alcohol or phenol, performed with the help of a nerve stimulator and/or fluoroscopy, result in a cost-effective and effective reduction of muscle spasms.

The main drawback to neurolytic blockade is its temporary duration and the need to repeat the block when the previous block wears off. Selective obturator nerve block has also been used in the diagnosis and treatment of chronic pain states secondary to knee arthrosis or pelvic tumors resistant to conventional analgesic approaches.

With the introduction of modern nerve stimulators, and particularly ultrasound guidance selective blockade of the obturator nerve has become more reliable.

The obturator nerve is a mixed nerve, which, in most cases, provides motor function to the adductor muscles and cutaneous sensation to a small area behind the knee. It is derived from the anterior primary rami of L2, L3, and L4. On its initial course, it runs within the psoas major muscle. Taking a vertical course, it emerges from the inner border of the psoas, staying medial and posterior at the pelvis until it crosses at the level of the sacroiliac joint (L5) under the common iliac artery and vein and runs anterior/lateral to the ureter.

Patient refusal, inguinal lymphadenopathy, perineal infection, or hematoma at the needle insertion site all are contraindications to obturator nerve blockade. Preexisting obturator neuropathy, clinically manifested by groin pain, pain of the posteromedial aspect at the thigh, and occasionally paresis of the adductor group of muscles, are relative contraindications to this block. Obturator nerve blocks should be avoided in the presence of a coagulopathy.

To perform a neurolytic obturator nerve block, the following equipment is required: 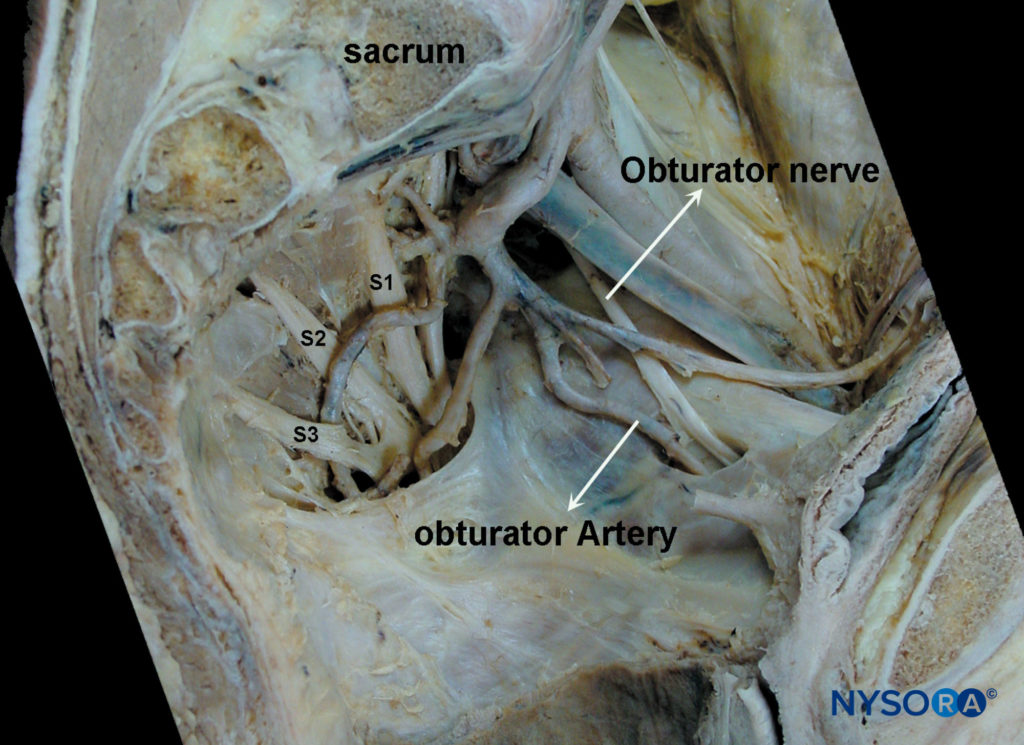 There are no reports of complications associated with obturator nerve block. The lack of reported complications, however, is more likely due to the infrequent use of this block rather than to its inherent safety. Needle orientation for the classic pubic approach of Labat is toward the pelvic cavity. Therefore, if advanced too far in a cephalad direction, the needle can pass over the superior pubic ramus and penetrate the pelvic cavity, perforating the bladder, rectum, and spermatic cord. Accidental puncture of the obturator vessels could result in unintentional intravascular injection and hematoma formation. A retropubic anastamosis between the external iliac and obturator arteries (corona Mortis) is present in up to 10% of patients: bleeding secondary to puncture of the corona Mortis can be difficult to control. Obturator neuropathy, secondary to needle trauma, intraneural injection, nerve ischemia, or local anesthetic toxicity are also possible, as with other peripheral nerve block techniques.